In the latter half of 1900 a group of 18 men from Mount Vernon, tired of traveling to Tuckahoe to play a modest nine-hole golf course, decided to purchase land to build a golf club closer to home. The men adopted the name from a Mohican Tribe that spanned along the Long Island Sound from New Rochelle to Hell's Gate in the Bronx. In 1901 Siwanoy Country Club was born.

In 1903, the club's lease was terminated and the property was sold to Mr. Bailey, a circus owner, forcing the club to find a new home. Just north of the original clubhouse, "The Hunt Property" was purchased and another 9-hole course, modest clubhouse, and tennis courts were constructed. The club existed on this property for about 10 years, but in 1913 increasing membership made the 9-hole course inadequate. The club decided to construct an 18-hole course, but found the current property unsuitable. The club was once again forced to find a new home.

The club settled on the 110-acre Paulding Manor in the nearby town of Eastchester, where it is currently located, and in 1914 Tom Kerrigan of Massachusetts came to Siwanoy as head professional. Several of the section's finest professionals including Jim Farrell, Art Wall, and Tom Nieporte, developed under Kerrigan's tutelage. Today, Grant Turner sits at the helm as head professional of Siwanoy Country Club.

In 1916 the PGA of America was formed and Siwanoy Country Club played host to its inaugural PGA Championship. That first championship saw a field of 32 golfers, qualified by sectional championships, in a 36-hole, single-elimination Match Play tournament. Kerrigan had the distinction of being the first player to hit a shot in the PGA Championship.

In the final match, Jock Hutchison jumped out to a three-hole lead, shooting 37 to Jim Barnes' 39. On the back side, Barnes reduced the lead to one, with both players scoring 77 in the first 18 holes. Barnes squared the match on the 21st hole and took the lead for the first time on the 25th with an 18-foot putt. By the 36th hole, the match was square and both players had five-footers for fours and, after a measurement, it was decided that Hutchison was out. Hutchison missed the putt and Barnes sank his, winning one up and claiming victory in the first-ever PGA Championship. 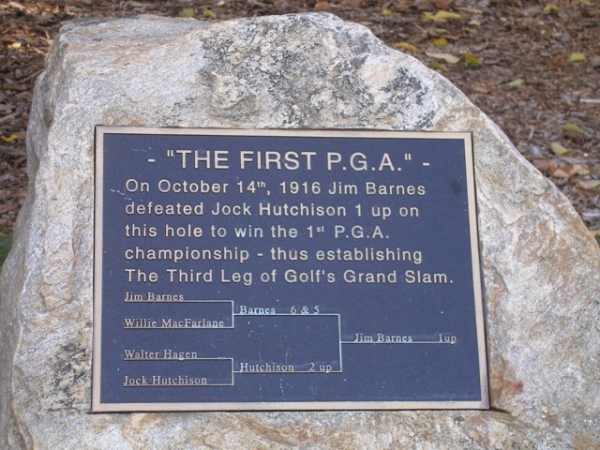