Three of our Metropolitan PGA Professionals Mark Brown, Matt Dobyns and Adam Rainaud will be playing for the US in the PGA Cup.

The 28th PGA Cup IS ON at the Foxhills Club and Resort, Longcross Course, Ottershaw, England! CLICK HERE for full live scoring as the US team aims to regain the Llandudno trophy. 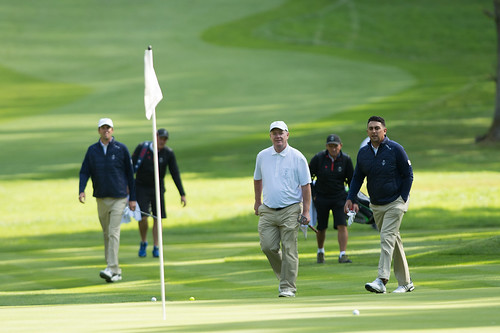 CLICK HERE for an Article about the start to the PGA CUP!

out our pros on siriusxm's Fairways of Life with Matt Adams! Courtesy of siriusxm

Info below via The PGA of America


History of the PGA Cup: The PGA Cup originated in 1973 at Pinehurst (N.C.) Country Club as a match-play competition between the top PGA club professionals from United States and Europe. It was held annually until 1984, when it was switched to a biennial event at alternating sites. The teams began with nine players, but the rosters were expanded to 10 in 1988. From 1973-88, the European team was comprised of PGA club professionals from Great Britain and Ireland. The format was changed from 1990-94, opening up qualifying spots to professionals throughout Europe. The selection process was revised in 1996 to feature only Great Britain & Ireland players.